Description of Offence: Two workers were injured when a hoist holding up a vehicle failed and the vehicle fell to the ground. 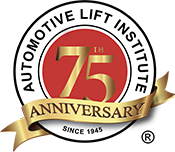